This demonstration will showcases how GeneAnalytics can be used to assess primary keratinocytes and to provide further understanding of their function in health and disease.

We will analyze the gene expression signature of epithelial stem cells, derived from human iPS cells, following differentiation and FACS isolation of a CD200+/ITGA6+ cell population. The study was recently published in Nature Communication, where the authors confirmed that this cell population can reconstitute the epithelial components of the epidermis and to further differentiate into keratinocytes.

The investigators performed a microarray experiment to compare the gene expression signature of the cell population to that of the parental iPSCs. Here, we re-analyzed the normalized data deposited in GEO to identify the top differentially expressed genes. Now, we will analyze this gene set using GeneAnalytics: we selected the input species (human in this case), copied the list of genes and ran the analysis to view the matching results.

The results page of GeneAnalytics is divided into several sections, including Tissues & Cells, Diseases, Pathways, Gene Ontology terms and Compounds. Each section presents entities, scored and ranked by their degree of matching to the gene set provided, as well as links to the data sources of the evidence.

The first section presents normal expression results. The detailed table on the right shows the matched entities, a list of matched genes and tissue annotations.

The powerful set of filters on the left enables you to focus on the results of greatest interest to you. The first filter in the tissues and cells section is the tissue/system filter, which serves as a low resolution results table and presents an integrated score for each tissue/system.

As anticipated, the hair, epidermis and epithelial cells were ranked highest in this analysis. Using the tissue filter allows us to review the entities and genes that best match those expressed in the Epidermis. A close match is seen between the analyzed gene set and human keratinocytes in vitro and to basal keratinocytes in vivo, which are early epidermis progenitor cells.

Clicking on the name of an entity will take you to the LifeMap Discovery®, where you can view the evidence for expression of the matched genes.

Clicking on the number of matched genes in this entity will open a table with information regarding their selectivity. Here we can see that 3 genes expressed in these cells, are considered selective markers, which are said to characterize a specific cell. Therefore, this match strongly supports the reported claim that these cells are primary keratinocytes.

After assessing the derived cell population, GeneAnalytics can be also used to evaluate the potential functions of these cells.

Primary keratinocytes in the epidermis form and continually renew a physical epithelial barrier, which protects against environmental damage and induces immune responses to danger. This barrier is disordered in many common diseases.

Results in the disease section indicate that many of the matched diseases are "skin diseases", which can be used to filter the results. The highest ranking diseases include various types of Epidermolysis Bullosa, which causes fragile and blistered skin, due to genetic defects affecting the keratin 14 and keratin 5 genes. Clicking on the number of matched genes will open a list of the genes that match the analyzed gene set, among them are these keratins, as well as other genes, such as collagen 17A1, collagen 7A1 and laminin gamma 2. These genes play a crucial role in the formation of the epithelial barrier. Clicking on the gene symbol will take you to GeneCards®  to learn more about the gene.

Other diseases that match the analyzed gene set include Keratoderma, which causes skin abnormalities, and involves several keratins, as well as several types of carcinoma, usually caused by disordered epithelial differentiation.

Clicking on a disease name will take you to its associated card in MalaCards – the human disease database, which unifies and integrates disease information and disease gene associations from multiple sources.

Matched pathways are consistent with elements that construct the epithelial barrier such as: collagen biosynthesis, cytoskeleton remodeling, ECM remodeling, and cell junction organization. The matching is based on highly expressed structural proteins, such as keratins, collagens and laminins. Matching to lipid signaling may reflect the integration of lipids into the insoluble outer epidermis layer, which occurs as keratinocyte differentiation progresses.

Each pathway is linked to a relevant card in PathCards, a novel integrated pathways database, which unifies pathways, overlapping in their associated genes, from multiple data sources.

GeneAnalytics also provides Gene Ontology analysis. While the GO – biological process matched terms are highly consistent with the results we saw earlier, they also provide insight into keratinocyte biology and function, such as: Epidermis development, Keratinocytes differentiation and Extracellular matrix organization. Each GO term is directly linked to its relevant card in the Gene Ontology database.

Matched Go – molecular function results highlight the structural function of these cells, and, in this case, suggest a "Calcium ion binding" function. It is known that Calcium regulation by keratinocytes is considered a potential mechanism of epidermis maintenance and repair.

The compounds analysis also ranks calcium as the most relevant compound, and supports the calcium binding function displayed in the previous section.

In this demonstration, we used GeneAnalytics to assess the derivation of primary keratinocytes, to identify their selective markers and to discover their functional roles in health and disease based on their gene expression signature. 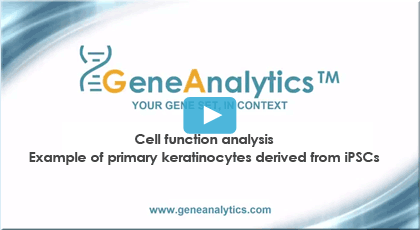