In this demonstration, we show how GeneAnalytics can be used to determine the quality of tissue dissection and cell isolation procedures. As an example, we will analyze the isolation of two dermal papilla cell populations taken from mouse back skin, reported in the journal ‘Development’ in 2009; CD133+ SOX2+ cells were assumed to correspond with guard cells and CD133+ SOX2- cells with zigzag dermal papilla cells.

The investigators performed a microarray experiment to compare the two cell populations. We re-analyzed the normalized data that was deposited in GEO, to identify the top differentially expressed genes in the CD133+ SOX2+ cell population. These genes were used as a gene set in GeneAnalytics: we selected the input species (human in this case), copied the list of genes and ran the analysis to view the matching results.

The results page in the GeneAnalytics' expression section is divided into two parts:

Surprisingly, the tissues that best match our gene set are the brain and peripheral nervous system, and not the dermis, as expected. This suggests that the isolated cells are not a pure dermal population.

Good matches can be seen for immature Schwann cells, and myelinating Schwann and Oligodendrocytes cells.  When we click on the number of matched genes in one of the matched entities, a table opens with information regarding the gene’s selectivity. We see that our unexpected result can be explained by the expression of several Schwann cell and oligodendrocyte-selective markers, such as mag, Mbp and Mpz in the isolated cell population, and also by the expression of sox10, which is a known neural crest stem cell marker that is enriched in melanocyte, oligodendrocyte and Schwann cells.

Using GeneAnalytics, we revealed that the researchers may not have isolated a pure guard papilla cell population. Our analysis suggests that the use of SOX2 as an isolation marker may have led to the isolation of a mixed population. Additional cell populations in the sample may in fact include neural crest stem cells, previously reported to lie in the dermal papilla of hair follicles from alternate anatomical location, or Schwann cells encompassing peripheral axons innervating the skin.

In this test case, we showed how GeneAnalytics can identify impurities in cell populations, based on our manually curated, filtered and annotated gene expression data in LifeMap Discovery®. As such, GeneAnalytics presents a powerful tool for assessing the efficacy of biological sample isolation. 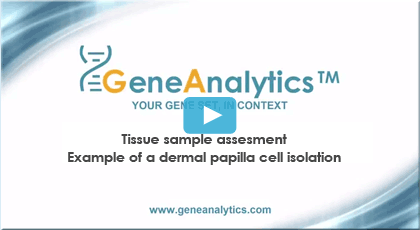