Example of hepatic and pancreatic derivatives

In this demonstration, we show how GeneAnalytics can be used to assess stem cell differentiation protocols and to evaluate the fate of derived cells, based on their gene expression profile. We evaluate as an example, the differentiation reliability of two cases: hepatocytes derived from human embryonic stem cells and pancreatic progenitors derived from mouse embryonic stem cells.

For the first example, we use results published in ‘Hepatology’ in 2010 in which H9 human embryonic stem cells were differentiated into hepatocytes. The investigators performed a microarray experiment to compare the gene expression profiles of the hepatocyte derivatives and embryonic stem cells. We re-analyzed the normalized data deposited in GEO to identify the top differentially expressed genes in the differentiated cells. We will now analyze these genes using GeneAnalytics: we selected the input species (human in this case), copied the list of genes and ran the analysis to view the matching results.

The results page in the GeneAnalytics' tissues & cells section is divided into two parts:

As expected, the liver tissue was ranked with the highest score in this analysis. These results indicate very good matching to genes naturally expressed in the liver.

However, when looking closely at the detailed results, we also see good matching to early differentiated derivatives of embryonic stem cells such as VEGF-induced embryoid bodies, suggesting that the cells that were evaluated were not yet mature.

Using the tissue filter on the left allows us to review the entities and genes matched to the liver.  Now we see that many entities in the liver closely match our gene set. The second matched entity is the liver organ. Clicking on the entity name will take us to LifeMap Discovery®, where the relevant evidence for expression of the matched genes in the liver can be viewed. For example, the gene Albumin is annotated by multiple sources, such as: Human protein atlas, Homer, Tiger, Barcode and BioGPS as being expressed in the liver.

Back to the results in GeneAnalytics, we see that the best matched in vivo cells are hepatic endoderm cells in the foregut. When we click on the number of matched genes in this entity, a table opens with information about their selectivity. Here, we can appreciate that 4 of the genes that were expressed in this hepatic cell are annotated as selective markers. The selective marker annotation is used for genes that characterize a specific cell. Therefore, this match strongly supports the claimed hepatic fate of the differentiated cells.

In the next example, we demonstrate how GeneAnalytics can identify undefined and mixed populations in derived cells thought to have a clear pancreatic fate. For this purpose, we will use the results of a study that was published in 'Stem Cells Review’ in 2012, describing derivation of pancreatic progenitors from mouse embryonic stem cells. The investigators performed a microarray experiment to compare pancreatic derivatives and embryonic stem cells. We will analyze the top differentially expressed genes of this comparison using GeneAnalytics: we selected the input species (mouse in this case), copied the list of genes and ran the analysis to view the matching results.

When focusing on tissue/system results table in GeneAnalytics, we expect to see a strong match to the pancreas. Instead, we see matching to many different and unrelated tissues such as epithelial cells, brain and kidney. In fact, the best matched pancreas-related entity only appears in the fourth page of the detailed results.

These two examples demonstrate how GeneAnalytics can be used to evaluate the efficacy and reliability of protocols designed for stem cell differentiation and the characteristics of the derived cells. 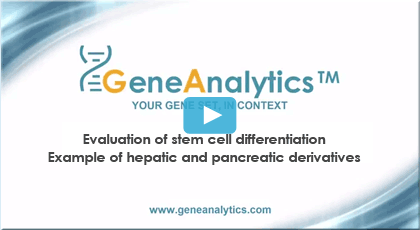